This week it was the turn of Year 6 to finally start the football season.  Our first match Monday was against Cunningham Hill on a very steep slope and very heavy pitch.  With a great number of supporters allowed to attend the game, the boys were very excited to be starting their first league match.  The first half showed some excellent play and Zach put us in front with a super goal before half time.  Cunningham Hill battled hard and equalised soon into the second half but with an excellent individual goal from Radoc the final score ended 2-1.  What a great start to the season.  Coaches player – Salvo 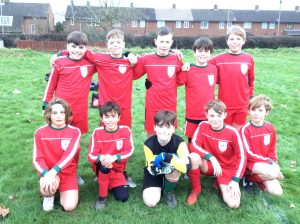 With not much time to recover the boys were playing again this time against Bowmansgreen.  The teams were very well matched and the first half showed excellent passing and goalkeeping from both teams.  SSAS started the second half strongly but were not awarded with a goal, Bowmansgreen defended well and eventually scored ending the game in a 2-0 loss to SSAS.  Although disappointed the boys played extremely well and were praised by the District Manager.  Players player – Johnny James, Coaches Player – Radoc